The Purple Panda – For Sale

When you’re considering buying a rally car, think about this advice from a pro.

She’s an ’87 Corolla with a Silvertop 4age running on megasquirt. She’s got an amazing cage built by Dave Clark ‘The Greater’, and custom JVAB suspension all around.

Custom 4 link suspension in the rear attached to a Volvo Dana30 axle with a welded diff and 4.7 ring and pinion.

A few people have driven this car, and I think all of them would attest to it’s balance. Both Adam and I have won the regional Group 2 at OTR in this car.

This is the perfect car to start rallying in, it’s low cost, low maintenance, and will teach you how to drive, and drive fast. It also wouldn’t take a lot of work to make it an extremely competitive group 2 car, just a bit more power, and a nice transmission.

This car is 100% ready to show up and run a rally, as we’ll demonstrate at Mt. Hood Rally, and the DirtFish Rally sprint (try before you buy?)

The price does not include the Braid wheels and I would like to keep the seats, you should really find a seat that fits you anyway. I have a pile of Volvo wheels, so it will come with some of those.  -Pictures and better descriptions below-

That green and blue and red sticker on the hood is from when we took the car down to Mexico and ran WRC Mexico, the car was inspected by FIA inspectors to enter that event, not to the extent the WRC cars were, but I can tell you that a lot of the other cars had a lot of trouble getting through, and because of the high quality cage in this car I had no problems at all.
That light bar is amazing and is 9600 lumens, it is better than most lightbars you will see people use, as the LED bulbs are much higher Wattage and it’s the real VisionX setup, not a cheap Ebay copy.
The stock steering wheel is in for this photo, a proper race wheel on a Toyota hub will fit.
It’s a little hard to see, but there is an air fuel mixture display and a water temp gauge in the middle panel there, as well as some switches for manually turning on the fan if you want and the lights and the defroster. The big black rubber button is your starter.

The sale doesn’t include the Braid wheels that are on in the picture, I will pull together the best Volvo wheels I have and some nice used rally tires and put them on the car, I will also at least throw two spare wheels and tires into the trunk. The tires should be good to get you through your first rally or a couple of rally crosses. I’m also keeping the seats, the bolts and washers to attach the seats will be there.
I haven’t collected spares and the like, but I’ll put together what I can find, it will mostly be spare engine parts, and sensors, and probably some Volvo brake stuff. There is a graytronics intercom system in the car. http://rallyintercoms.co.uk/product_range.html. I’ll include the headsets for one open faced and one closed face helmet, I have to talk to the other driver, but we might have two more open faced setups that I will also throw in. My codriver and myself have been using a Garmin GPS as our rally computer, the mount will be left in, so you can get a GPS and use that, or setup a rally computer like most people use.
The car has a Megasquirt ECU, and I will make sure the cable to connect it to a computer will be included. The tune on there now is OK, but it would be worth your time to do some more tuning, it is on the safe rich side right now. It has a 20V silvertop that I just put in it, and it has run only one event since. Our tuner guy who is really good and knows the car very well lives in Portland, so I can arrange a meeting if you want to get it tuned by him.
The suspension is a custom JVAB setup, and I can give you John’s number if you need to order anything new. The rear struts are fine, but the front struts are ready for new inserts, they function right now because I just pulled them out, cleaned them, and put new grease in there, but they could lock up again in a full rally. You can order new inserts from John, or you could upgrade to his new larger setup, or there are some other custom options with a little tweaking. The hubs are Volvos, but they are customized to use a Subaru style ear mount. 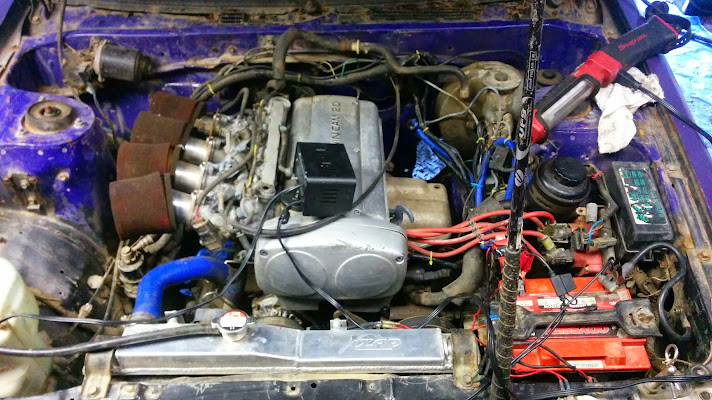 Here’s the motor, it’s a stock Silvertop 20V, they are stock a little less hp than the blacktop, but they have better compression in the head, so if you decide to rebuild the motor, and put in high compression pistons, you will get more power and compression ratio out of the silvertop than the blacktop. I can show you everything I used to get about 200hp out of the previous motor. The aluminum radiator was put on just two rallies ago with a brand new Mishimoto dual fan setup, it will never overheat. The coolant setup is the Techno Toy Tuning setup, which is really nice because it runs the coolant under the intake rather than the hot exhaust that most 20V swaps do. The VVT still functions and is controlled by the Megasquirt. 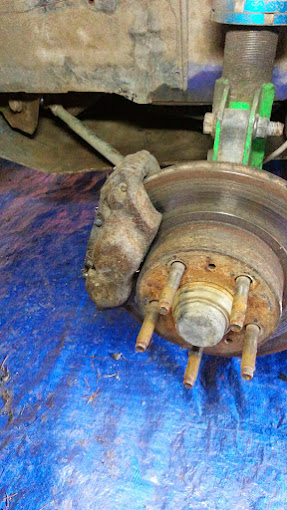 Here’s the front hub, it has the Volvo 4 piston calipers which are much better than the old Toyota setup we used to use, great bearings, and a rock solid pedal.  Also you can see the Subaru style ears on the bottom of the shock. 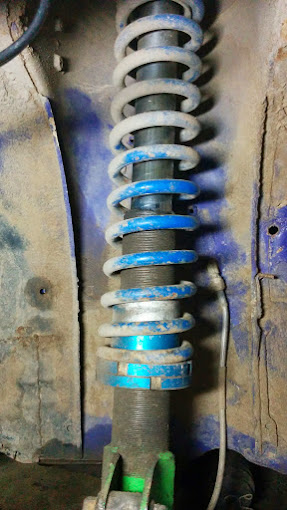 Here’s a picture of the coilover setup at full droop, there is 9″ of travel in the front and 10″ in the rear. 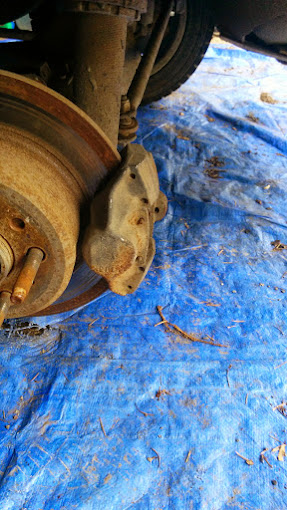 These are the rear Volvo calipers, much larger than the Toyotas. 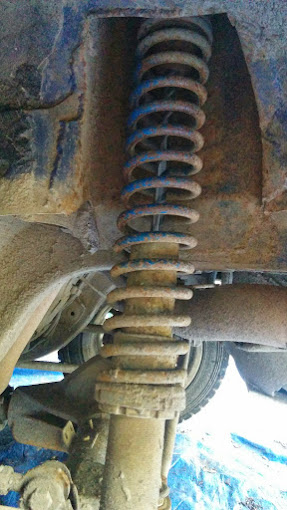 You can see the inside of the custom rear towers from here. 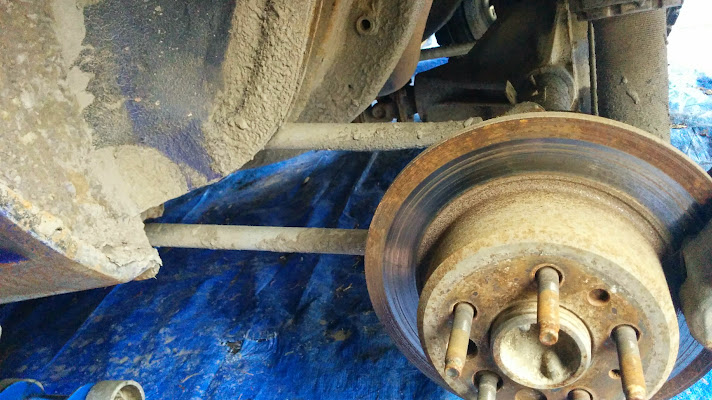 Here is the custom 4 link rear trailing arm suspension, the parts for this are all available from circle track racing shops, which is great, because you can get them relatively cheap, and they are usually in stock.

Here’s a shot of the Volvo Dana 30 rear end with a welded diff. The ring and pinion in this thing makes these cars really jump off of the line, it’s a great feel. The rear end is usually pretty easy to find in a junkyard, which is nice, and Yukon makes a ton of different ring and pinion sets that you can order to mess with the ratio anyway that you want. 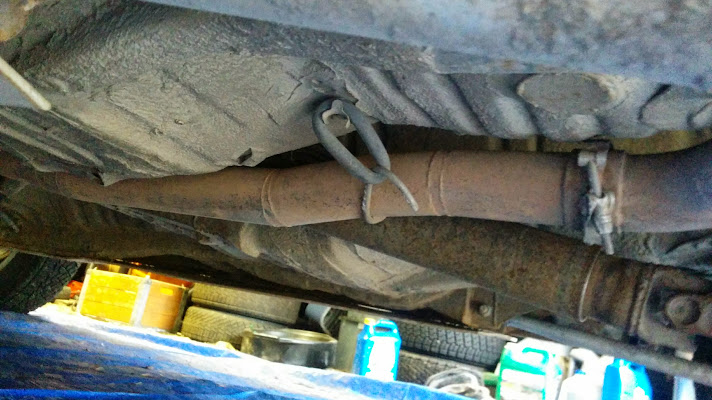 It’s a little dirty, but this is a quick shot of the exhaust system, it is a custom 2.5″ Stainless steel setup that runs from the headers back. It’s very slick and cost me way too much money. 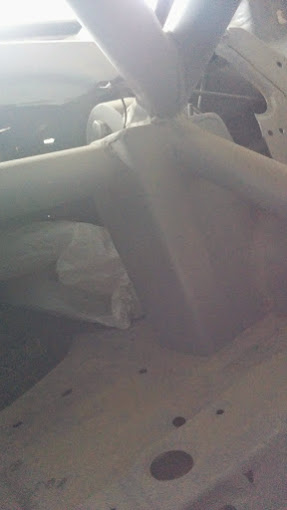 Here’s a shot of one of the custom rear towers built into the cage. 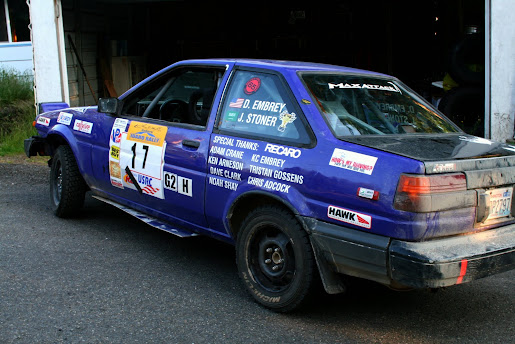 Dustin was a classmate with me at the VRI at Western Washington University. We learned about and liked cars. He was also driving around quick Toyotas, while I was building my rally car. He came to events and helped wrench, then decided to build another Corolla, so he could race too. The Purple Panda has something to do with Forza Motorsports. His car was like a little brother to mine, but with better genes. Now it’s more like a cousin.

Here are some links:

A gallery of build pictures